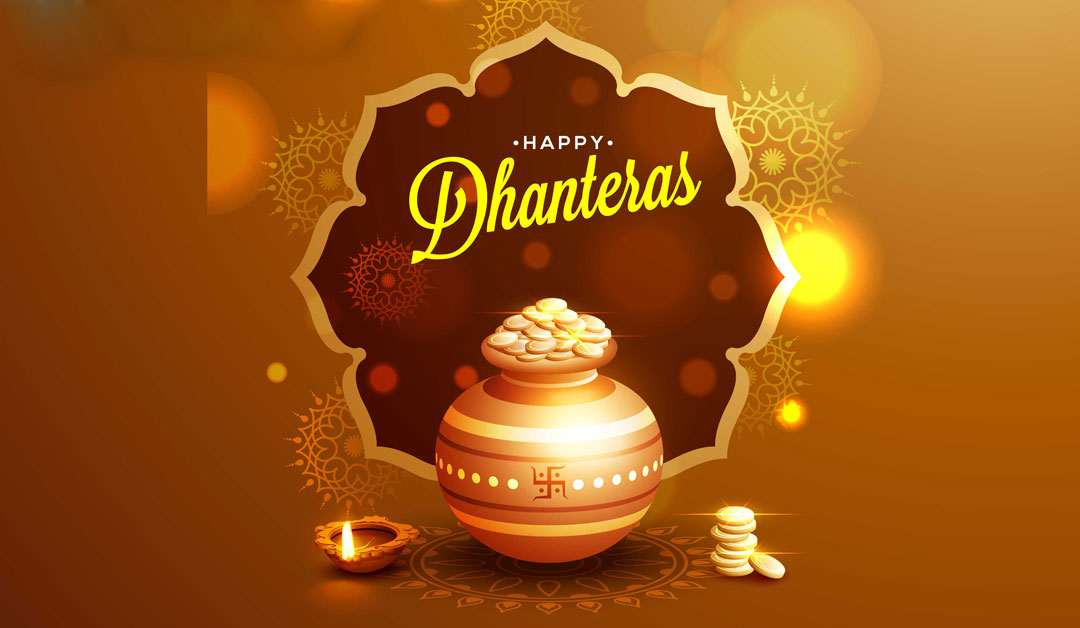 Dhanteras, also known as Dhantrayodashi, is a prominent festival in Hindu religion. On this day, people purchase utensils and jewellery to bring good luck. The word is derived from Dhan, meaning wealth, and Teras means thirteen because the festival is celebrated on the thirteenth day of Kartik month according to the Hindu calendar.

Dhanteras is the worship of Lord Dhanwantari, who according to Hindu mythology, emerged during SamudraManthan, holding a Kalash full of Amrit in one hand and the sacred Ayurveda text in the other.

In many parts of India, Dhanteraspooja is celebrated as Yama Triyodashi or Deep Daan . According to a legend, king Hima was worried because his 16 years old son was predicted to die of snake bite for some days after his wedding. Then the Prince’s bride came up with a clever idea to stall Yama(the God of death).

On the third night, she had her attendants light up earthen lamps inside her palace, bathing it in light. She also laid out all her jewellery, gems, and silver coins outside her husband’s room.

She kept him awake by telling him stories, singing to him and involving him in a game of cards. When Lord Yama came at midnight in the form of a snake, he stretched out on top of gold coins and listened to Princes stories and songs.

In the morning, Yama was impressed with the Princess’ commitment that he granted her husband’s life. After this legend, there evolved a tradition of purchasing gold and silver coins stamped with images of Goddess Lakshmi and Lord Ganesha on Dhanteras .

How to celebrate Dhanteras 2021?

In the morning women make Rangolis on the entrance of their homes to welcome Goddess Lakshmi. Sometimes tiny footprints are etched with rice flour and gulal powder to symbolise the arrival of Goddess.

Diyas are lit through the night to honour the Goddess of wealth. Businessmen and traders renovate and decorate their shops and offices on this day. Dhanteras holds special meaning for traders and businessmen who purchase gold, silver and other precious metal on this day.

On Dhanteras , people worship Goddess Lakshmi for a prosperous life and well being. In the evening hours, after getting rid of all waste and cleaning the house thoroughly a lamp is lit to mark the sanctity of the house. Devotional hymns are sung eulogizing the Goddess of wealth and sweets and fruits are offered to her.

The God of wealth Kuber is also worshipped on the day. Dhanteras makes the beginning of the festival of lights Diwali. Hindus, across India, devotedly worship Goddess Lakshmi for wealth, prosperity, apulence and happiness on this day. Traditionally, Lord Dhanwantari , the originator of Ayurveda and the physician of God’s ,was worshipped on Dhantrayodashi for Good health.